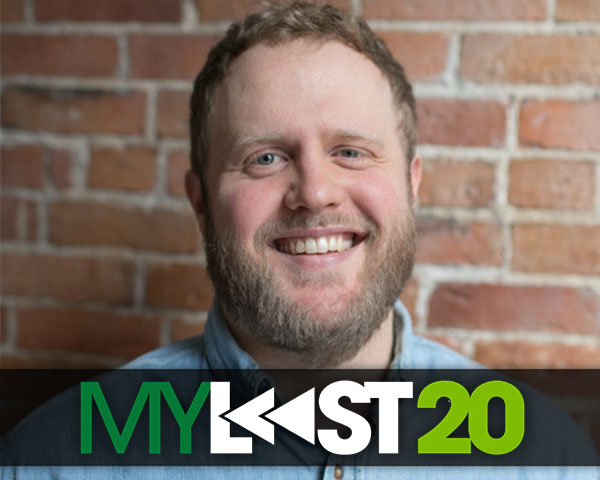 Welcome to the latest edition of My Last Twenty! For this installment we’re featuring REVERB’s Lead Project Coordinator, Carson.

In addition to having an incredible knack for keeping all of our projects running smoothly, Carson may also have one of the most eclectic musical tastes of anyone at REVERB – and that’s saying something.

Make sure you check out the song descriptions below… Welcome to Carson’s wildly wonderful mind.

So, without further ado, we present Carson’s My Last 20.

There is this amazing locals only taco stand on the east side of Tulum that I’ve never been to but this song is great for getting work done at the office.

Supposedly the day Ice Cube is rapping about in this song is Nov 30th, 1988 but because I was only 4 and my mom (unfortunately) can’t remember the specifics of that day, I’ll never know how mine compared

Everybody Knows This is Nowhere – Neil Young

Because wearing headphones isn’t enough, I wish somebody would invent a specifically colored dog leash that would signal “I will not stop so our dogs can Say Hi and I have no interest in talking to you”

How to Disappear Completely (And Never Be Found Again) – Radiohead

Carry the Zero – Built to Spill

When I successfully get an equation to work in excel, I feel like I’m shredding these guitar parts to thousands of screaming fans from the comfort of my own desk!

One day, when I can plug into the Matrix, I’m going to ask for the “Southern California in the 70’s package with iPhone compatibility”

Heaven’s On Fire – The Radio Department

Swedish Fish (in Sweden) are called pastellfiskar which literally translates into “pastel fish”. Unlike Boston Chicken which is still called Boston Chicken in Boston

Send a postcard to yourself from this 6 minute mental vacation!

WISH that you had this guys enthusiasm for the Gummi Bears. For ANYTHING.

EDITOR’S NOTE: This isn’t available on Spotify, but if you were born in the 80s it’s totally worth finding this somewhere on the interwebs and listening. Yes, it’s as good as you remember it.

The Outdoor Type – The Lemonheads

Turn your boring walk into an intense 3D German Drama