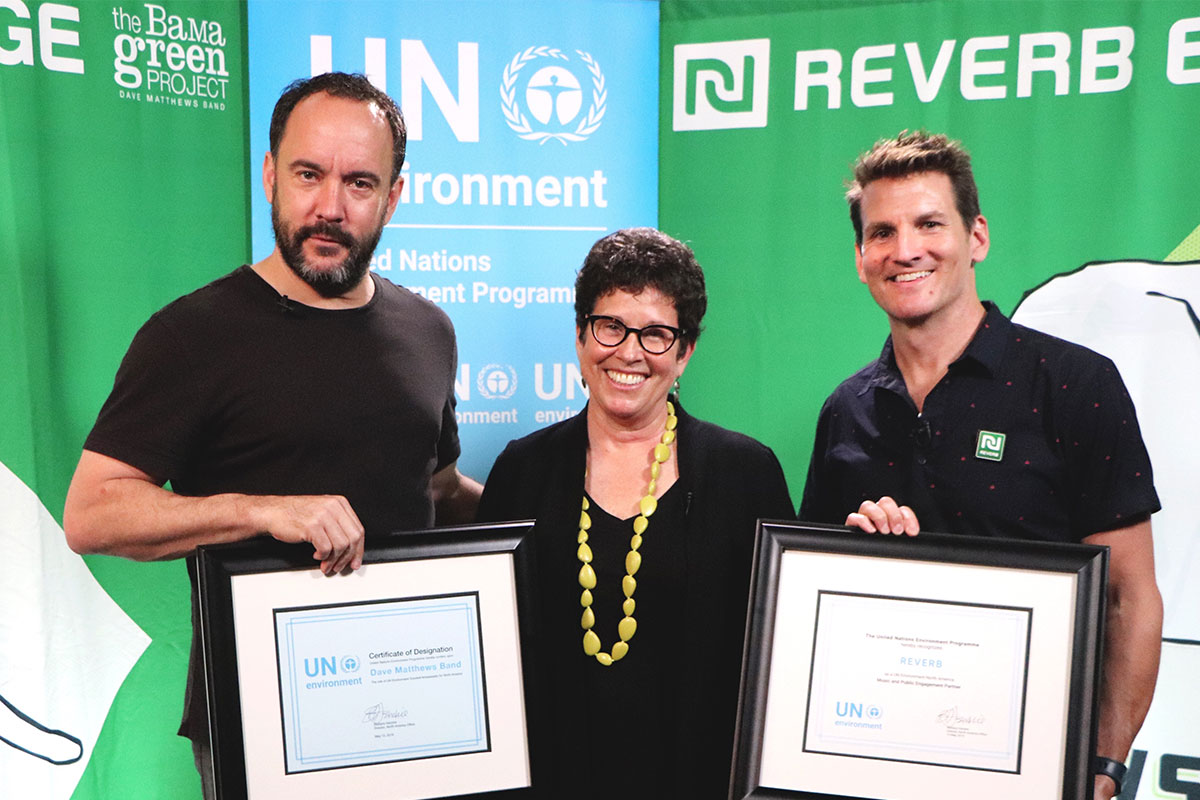 June 5, 2019—World Environment Day – For their powerful environmental advocacy and large-scale engagement of their fan base to take action for the planet, the United Nations Environment Programme has designated Dave Matthews Band as a Goodwill Ambassador.  This is the first time a full band has receive this recognition.

The band and nonprofit partner REVERB have been working together since 2005 on the BamaGreen Project – an ambitious set of environmental efforts undertaken by the band on the road, in the studio, and at home, as well as the education, mobilization and resulting actions of DMB fans around the globe.

Entering the 15th year of the DMB/REVERB partnership, the band and the nonprofit have calculated the impact of their efforts and released a comprehensive report detailing the results of their work.  Their efforts have led to REVERB becoming UN Environment’s Music and Public Engagement Partner – harnessing the power of music to unite millions of fans around the globe to tackle today’s most pressing environmental issues.

“It’s desperate times, and we all need to work together to have hope for the future, hope for our children, and hope for the planet,” stated Dave Matthews at the UN Environment Goodwill Ambassadorship ceremony at their St. Louis tour stop.

“We wholeheartedly welcome the entertainment industry in joining government, civil society and private sector leaders in the fight for positive climate solutions,” said Barbara Hendrie, Director of the UN Environment Office for North America. “Musical artists are in a unique position to use their platforms as performers and public figures to build awareness and engage their fans to take action on a very large scale.”

The designation of Dave Matthews Band comes on the occasion of World Environment Day, the UN’s annual call for action on environmental protection. Celebrated annually on June 5th, the theme for this year’s commemoration is air pollution, an issue leading to around seven million deaths each year globally. Through a global campaign, UN Environment is calling on everyone to #BeatAirPollution by making ambitious lifestyle changes; using public transport, car sharing, cycling or walking; reducing consumption of meat and dairy; and saving energy by turning off lights and electronics when not in use, for example.

For every show of the band’s North American tours, REVERB designs a comprehensive sustainability program that looks at the overall environmental footprint and works with band and crew members to mitigate the environmental toll of touring. Efforts include fueling trucks and buses with biodiesel, sourcing local farm food for catering, single-use plastic reduction, composting and recycling backstage and offsetting tour carbon emissions by helping fund the creation of projects like solar and wind energy.

The partnership extends beyond greening their tours to include Dave Matthews Band’s dedicated fan base. At a time when it’s hard for an individual person to feel like they can make a difference with an issue as big as global warming, the band and REVERB offer an empowering platform for millions of DMB fans to “band together and be bigger than the issues we face.”

Each show features the BamaGreen Eco-Village in the main concourse of the concert venue where fans are encouraged to be active participants in these efforts by reducing their environmental footprint, interacting with local and national nonprofits and supporting causes that have been selected by the band. Fans that participate are rewarded with opportunities to win prizes, like an autographed guitar. For the current 2019 summer tour, the focus is on fighting climate change, where fans take climate action to reduce their carbon footprint and raise funds to build rooftop solar projects on low-income housing.

“The music industry needs artists who lead by example, and The Dave Mathews Band has truly set the gold standard for green tours,” said Adam Gardner, Founder of REVERB and a member of the band Guster. “We are grateful to be working with artists like Dave Matthews Band who engage, educate and mobilize their fan base in the fight against climate change. This sends an important message to policy makers around the globe: The time to act is now.”

UN Environment is the leading global voice on the global environment. It provides leadership and encourages partnership in caring for the environment by inspiring, informing, and enabling nations and peoples to improve their quality of life without compromising that of future generations. UN Environment works with governments, the private sector, the civil society and with other UN entities and international organizations across the world.
www.unenvironment.org/regions/north-america

Uniting around the music we love, tackling the environmental and social issues we face, REVERB is a nonprofit organization dedicated to empowering millions of individuals to take action toward a better future for people and the planet through direct action at concerts. We partner with artists, festivals, and venues to reduce the environmental footprint of live music and touring while engaging the music community – music-makers and music-lovers – to create real, positive change. www.REVERB.org